I had a great time today swimming with the sharks at Kicker Rock here in the Galapagos Islands.

Of course there were turtles too. 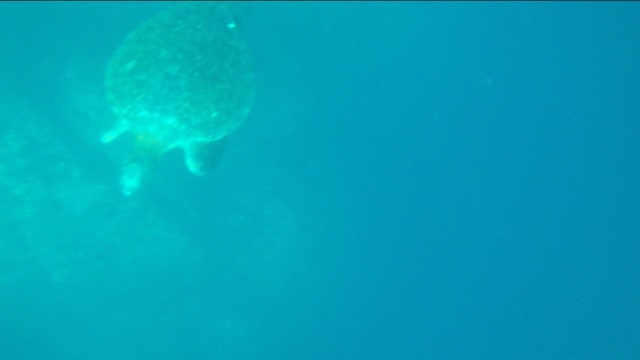 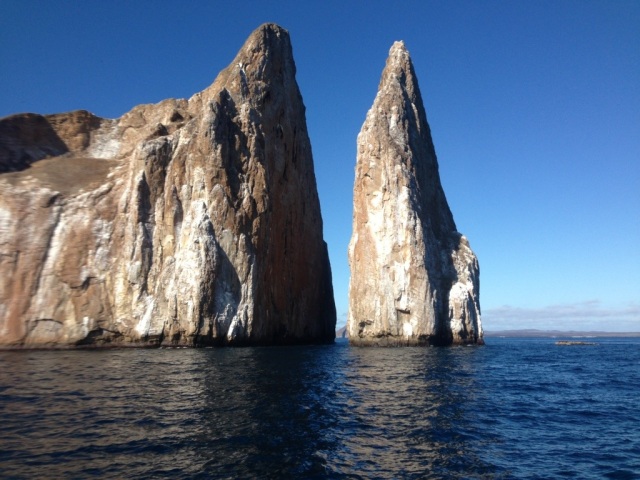 I’m in Quito today. We went to the market in Otavalo and visited an extinct volcano that now has a lake in it’s caldera. When I woke up this morning I was blessed with a view of a snow capped volcano. The skies had cleared long enough to provide this view from my room.

Here is a picture of the volcano caldera lake.

Tomorrow it’s up early for the flight to the Galápagos Islands. I’ll be out of touch for the next 5 days. So stay tuned to my Spot GPS updates and more post when I return. The adventure continues.

How Fast Things Change In The Rain Forest

This is the same view looking out over the Amazon basin from the foothills of the Andes. Pictures were taken aprox. one hour apart. They don’t call it a rain forest for nothing. Once it moved in it rained all yesterday, last night and today. I’m back in Quito now. We go to Otavolo tomorrow and then Galápagos Islands on Monday.

Yes, it rains everyday in the rain forest. Some times more then once.
I am on the Eastern side of the Andes mountains and will be headed down to the beginning of the Amazon jungle tomorrow. I hiked a few clicks up a mountain to visit this waterfall today. The Andes are an amazing place. Imagine the Rocky Moutains with a jungle on top. Can’t wait to see what tomorrow brings. Good night. Stay Tuned!

It’s just how it sounds. A forest in the clouds. But this is the dry season and we have been blessed with blue skies.

We have been birding and trekking through the mountainous forest. Words can not begin to describe the beauty of this place.

Here are a few of the birds I have seen and photographed. 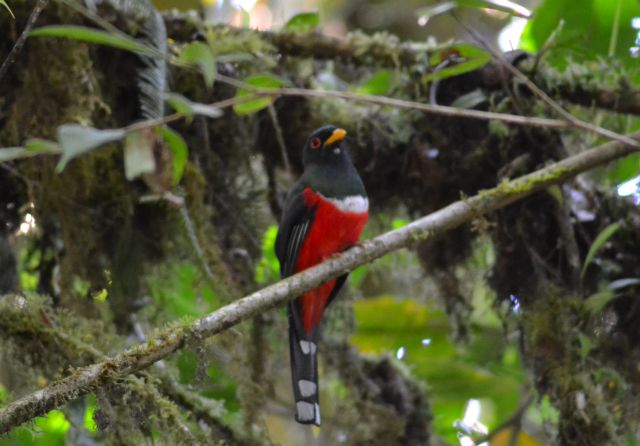 The first day in Ecuador was very eventful. I saw an Andean Condor and went from the high Andean cloud forest down to a tropical rain forest valley. This is the most incredibly rugged place I have ever seen. Truly breathtaking. The mountains are huge and the canyons and ravines are as steep and deep as the mountains are high.

Why I’m Traveling To Ecuador (Part 4) 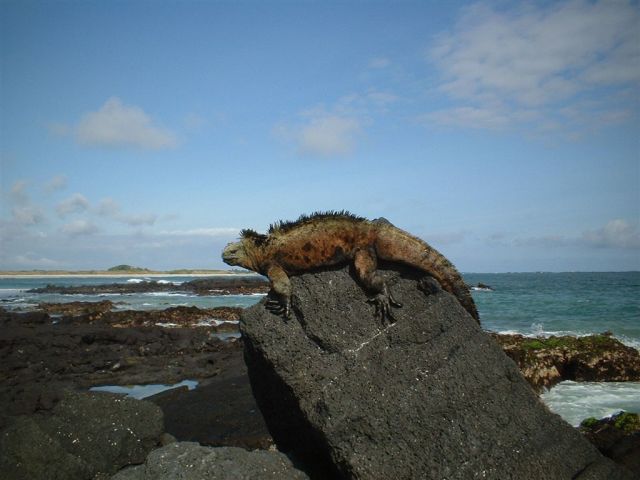 The Galapagos were born from volcanoes erupting violently out of the sea. Plant and animal species traversed 1000km of ocean to colonize the islands, leaving species isolated and evolving independently on different islands. Observing this had a resounding impact on the formations of Darwin’s Theory of Natural Selection and the theory of evolution by natural selection. 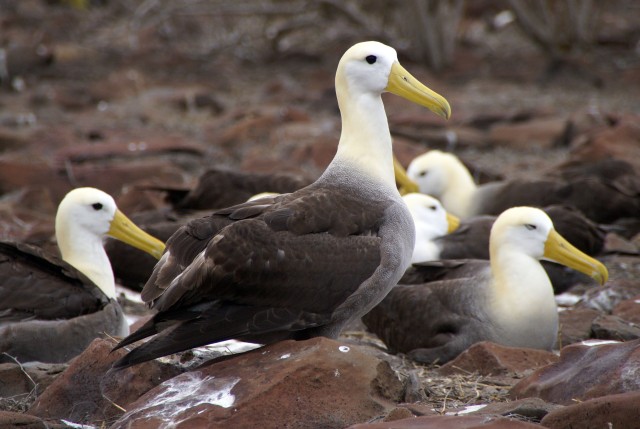 The Fun Begins In 2 Days

While traveling to another country will always bring about new digestive experiences. It’s something every human does, eat. So instead of looking for the Euro/American food I plan to eat what I can from the locals. Here are a few of the treats Ecuador has to offer. Looks like Ecuador is like the Louisiana of South American with a wide range of food and flavors.

Jugo natural – freshly squeezed juice.   Unbeatable.
Unusual varieties include:
Tomate de arbol – literally tree tomato, similar in shape to a plum tomato, but much sweeter.
Naranjilla – bitter orange, too sour to eat in its solid form, but the thick green juice is delicious.
Mora con guanabana – blackberry mixed with a thick white juice reminiscent of pear.
Mora – blackberry, usually nice and sweet
Canelazo – a brew of cinnamon and naranjilla, served hot, often with a shot of aguardiente poured in.
Cafe – Ecuador exports its best coffee, and Nescafe or a brew from beans that didn’t meet export standards is often served.   Café pasado is a thick coffee reduction, served with hot water or milk to dilute.
Oregano Tea – Good for upset stomachs.

Cuy – guinea pig, a typical dish of the Northern Sierra
Fritada – chunks of fried pork, typically served with a thick slice of avocado, fried sweet plantain, corn, hominy and llapingachos (see below).
Carne colorado – translating as “colored meat,” the dish is chopped steak colored red with annato.   El Meson de las Flores in Cotacachi is reputed the birthplace.
Hornado – literally means baked, usually refers to roast pork.
Llapingachos – cheese and potato patties, served throughout the Sierra, but Ambato claims to have the best.
Seco de chivo – literally goat stew, but oddly enough usually prepared with lamb, and served with yellow rice.
Locro – proving the adage of the sum being greater than the parts, the creamy potato and cheese soup is not to be missed. It is also sometimes served with avocado.
Empanadas – both the fillings and the dough differ in composition than many of their South American counterparts (there are casual restaurants and food stands that specialize in the Chilean and Bolivian cousins).
Empanadas de verde –dough made of green plantains, typically filled with cheese.
Empanadas de morocho – dough made of white corn (morocho), typically stuffed with ground beef.
Empanadas de viento – an airy plate-sized empanada of white flour dough with a cheese filling and a dash of sugar sprinkled on top.

Ceviche – a popular dish throughout Latin America, Ecuador’s version is soupier than in neighboring countries, and served with popcorn and corn nuts.   Tossing the popcorn in a bit at a time so it doesn’t get soggy, they provide a crunchy contrast to chewy seafood.
Unlike many other countries, Ecuadorian restaurants typically cook the seafood first – which may take a bit of the edge off the tasting adventure, but helps avoid any seafood revenge.
Camaron – shrimp (Ecuador’s third-largest export industry).
Vuelva a La Vida – translating as “back to life,” and allegedly the cure for a hangover, this ceviche is typically a combination of shrimp, oysters and Shellfish

Fresh fruit is cheap, plentiful and delicious. There are good unusual local fruits and introduced fruits. Some include:
Pineapple
Guava
Melon
Passion Fruit – It’s worth trying as many types of passion fruit as possible in the local markets.
Bananas – Again try to find different varieties in the markets

Why I’mTraveling To Ecuador (Part 3)

Covering approximately 12’000,000 H., the major area of the Ecuadorian Amazon supports exuberant vegetation that is typical of humid tropical forests, its western limit is the Andes Mountain Range, Peru lies to the south and Colombia to the north.

Immense quantities of material flowing from the Andes have been washed down the rivers, forming strips of alluvial soils and terraces that are used for farming.

The annual average temperature falls between 25° and 25,5° F. Between 300 and 400 cm. of rainfall are distributed more or less equally throughout the year, although December through February are the drier months.

The principal attraction of the hilly forest is, of course, the trees, some soaring higher than 46 m. Common species are cinnamon, silkcotton, jacaranda and several leguminous trees. The alluvial plains, located on the terraces of the principal rives, support great concentrations of palm trees.

The principal Amazon artery for visitors is the Napo River, a major tributary of the main Amazon River. Its basin is 1400 Km. long and one to three miles wide. As a result of fluvial dynamics, the Napo’s 130 islands are covered by young forests, which provide refuge and nesting sites for a multitude of bird species, many of them migratory.

Along the length of the Napo, natives and settlers have established communities, intersperced occasionally with small hotels and lodges. Most of the shore is covered with tropical forest, and over thousands of years, riverbeds have formed many attractive lakes.

Historically, the indigenous communities have been able to maintain a productive subsistence within the existing ecosystems of vast forest preserve. The most representative are: the Siona­ Secoya, Cofan, Huaorani, Quichua, Shuar and Ashuar.

The Amazonas ecosystem, particularly its tropical rain forest, is considered to be one of the richest and most complex communities of plant and animal life in the world. The region is characterized by huge and diverse amounts of flora and fauna with extraordinary variations in their habitats and micro­ habitats.

In the jungles of the Upper Amazon 100 species of trees per acre habe been recorded. In Central America, only up to 40 species per acre have been discovered. In the temperate forests of North America and Europa, rarely more than 20 different species exist per acre.

The Amazon’s rivers, lakes, streams and marshlands support over 600 species of fish and more than 250 species of amphibians and reptiles. The lagoons of the Napo and Aguarico River basins are home to colonies of two species of caymans that grow to over 13 feet in length.

Typical South American mammals which live in Ecuador’s Amazon include armadillos, honey bears and sloths. Amazon bats form a cosmopolitan group numbering more than 60 species. Other mammals found in the tropical forest include tapirs, monkeys, and ocelots (or jaguars). On a walk through the forest, you will observe groups of monkeys, boars and large rodents; and in the lagoons there are manatees and caymans.

The Adventure Begins In 5 Days